Sweden in February is covered by snow and glittering like silver, and now Chinese dragon dance and Fengyang Flower-Drum performance added colour and festivity when the celebrations of Chinese New Year 2019 took place in Stockholm, arranged by the Chinese Embassy in Sweden and the Museum of Far Eastern Antiquities, together with the Chinese Cultural Centre in Stockholm and Chinese people living in Sweden. 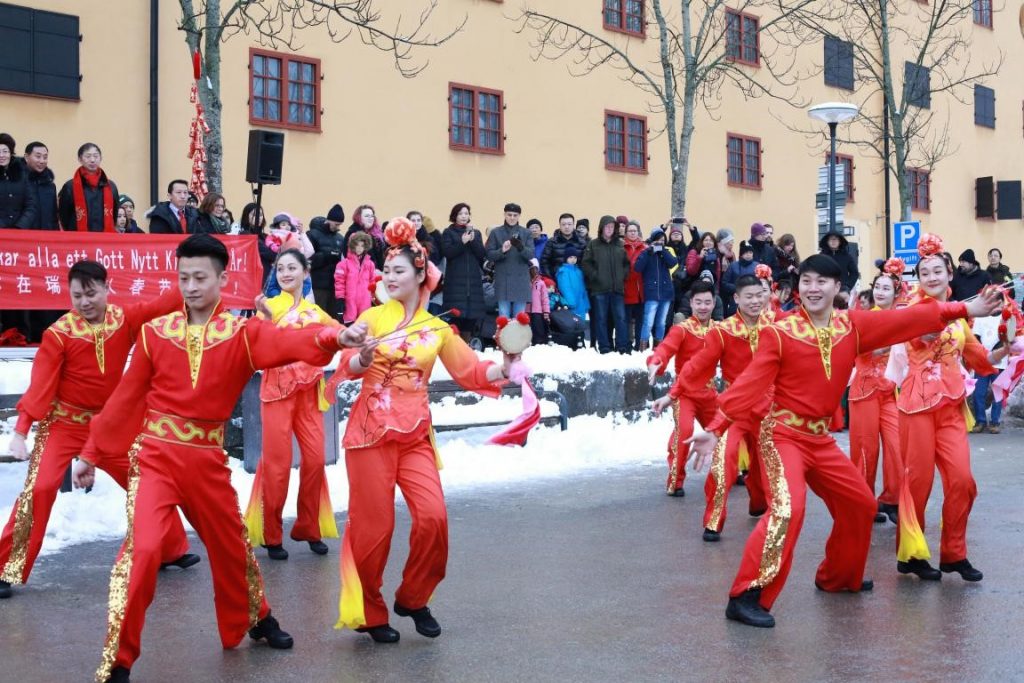 Several hundreds of people came from all parts of Sweden to join the Chinese New Year 2019 celebrations on February 2nd.Among the guests were Chinese ambassador in Sweden Gui Congyou and his wife Song Jingli, cultural attaché and director of the Chinese Cultural Centre in Stockholm Chen Xiao and her predecessor, Pu Zhengdong who is now leaving his post, director of Anhui Provincial Administration of Culture and Tourism He Changfen 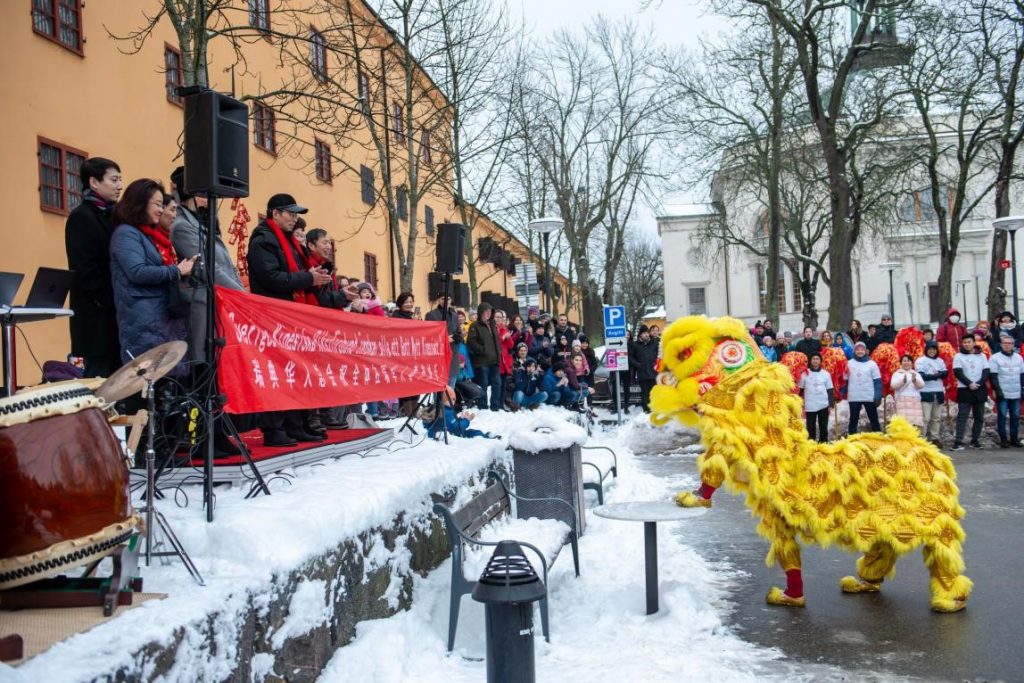 g and director of the Swedish Museum of Far Eastern Antiquities Ann Follin.

Ambassador Gui Congyou held a warm speech in which he first greeted all friends warmly welcome and wished them a Happy New Year.

He pointed out that the Spring Festival, as the traditional Chinese New Year is also called, is the most important and the most representative of all Chinese traditions. It forebodes springtime and tells us about the revival of nature, and it also expresses the Chinese people’s hopes and expectations for a good and happy life, for love and friendship. That is why, he said, we have brought our way to celebrate New Year to Sweden, so that we can share our festive joy with the Swedish people. During last year, the relations between China and Sweden developed steadily, and there were good results in different fields. In the coming year, we will celebrate the 70th anniversary of the founding of the People’s Republic of China and the 69th anniversary of the establishment of diplomatic relations. We would like to build upon our traditional friendship together with our Swedish friends, fully develop the potential for cooperation in all fields, and inject even more positive energy and vitality in the development . 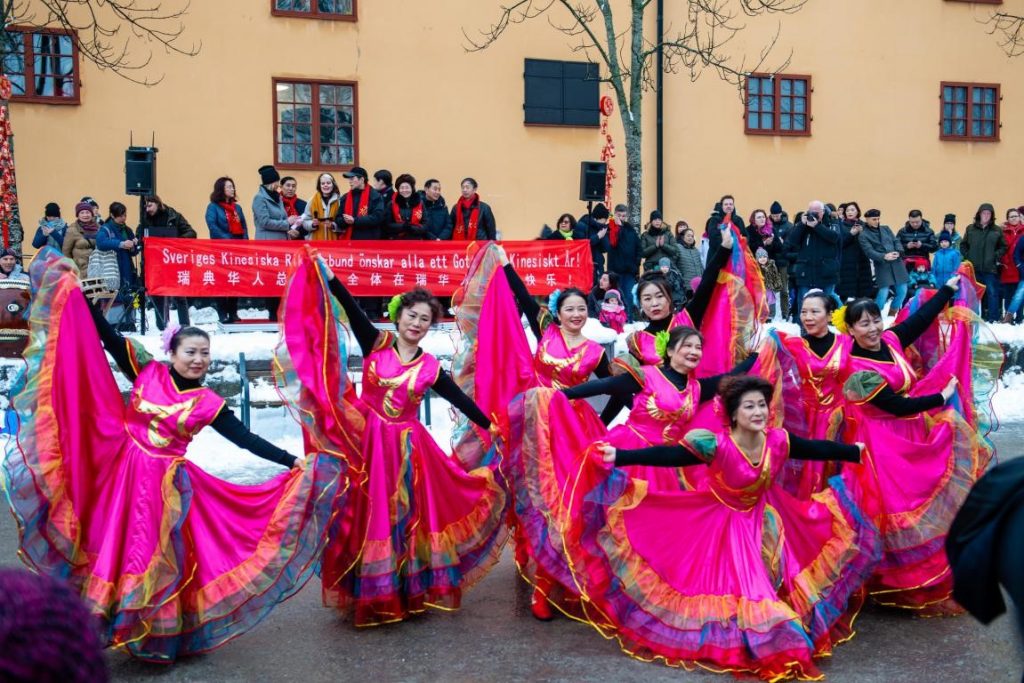 In her speech, Ann Follin pointed out that the Museum of Far Eastern Antiquities has participated in celebrating Chinese New Year for many years now in order to show Swedish peoplethe colourful Chinese culture, in cooperation with Chinese people living in Sweden and with Chinese authorities and artists. She also thanked the Chinese artists present for bringing their festive celebration to Sweden. Chinese New Year is here, she said, and we wish all Chinese living in Sweden a good health and happiness during the new year!

Later on, Ambassador Gui Congyou and his wife enjoyed, together with the rest of the audience, the Fengyang Flower-Drum performance, Chinese dance performance, origami, tea ceremony and calligraphy display.

The Anhui Art Troupe, which was a highlight of the event and specially brought in from China, presented in Falköping and Stockholm the Fengyang Flower-Drum Performance and Photo Exhibition promoting Anhui Tourism. The beautiful landscapes and cultural traditions of China’s Anhui Province have entered the heart of the Swedish people at the beginning of the new year. 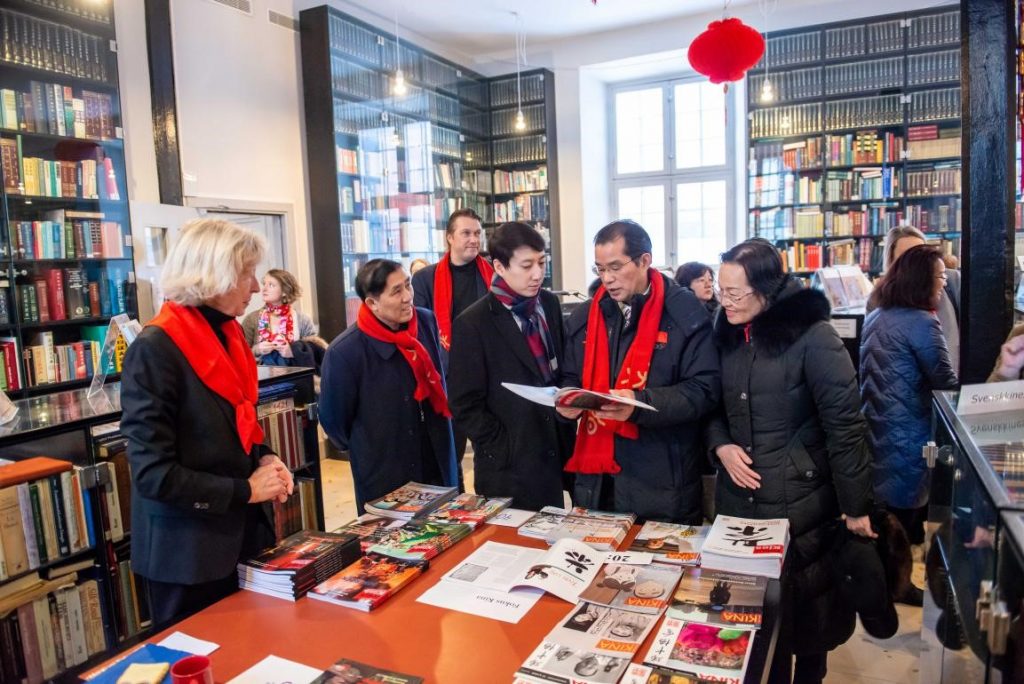 This year, the Chinese Embassy in Sweden and the Museum of Far Eastern Antiquities jointly arranged the ”Happy Chinese New Year ”events for the sixteenth time. Many of the audiences that came were ”old faces” and enthusiastic fans. They all said that the ”Happy Chinese New Year” event is getting better and better, the content is rich and colourful and every year they bring family members to watch.