On June 3, 2019, the “China Tourism Culture Week – Beautiful Anhui” event kicked off at the Chinese Cultural Center in Stockholm. Mr. Gui Congyou and his wife, the vice governor of Anhui Province, Yang Guangrong, both the Cultural Counselor of the Embassy of the Swedish Embassy and the Director of the Chinese Cultural Center of Stockholm, Chen Xiao, the Director of the Anhui Provincial Department of Culture and Tourism, Yuan Hua, and the the Director General for International Affairs of Swedish Ministry of Culture, Thomas Lindman and people from all walks of life in Sweden, including embassies, politics, economics, literature, and education. More than 150 representatives from various countries and representatives of overseas Chinese attended the opening ceremony.

Ambassador Gui expressed his warm congratulations on the successful hosting of the ”China Tourism Culture Week – Beautiful Anhui” event! He said: Cultural exchanges between countries are an important channel for enhancing mutual understanding between the people. Sino-Swedish cultural exchanges have a long history of respecting each other’s history and culture, respecting each other’s values ​​and ideas. It is hoped that the cultural cooperation between the two countries will be closer and deeper. The beauty of states in mutual understanding will jointly build this world into a more colorful way of living. He also expressed his appreciation to the Stockholm China Cultural Center for inviting friends with autism to watch the Chinese shadow play. He hoped that the ancient Chinese shadow play art with more than 2,000 years of history would bring warmth and happiness to these Swedish friends. 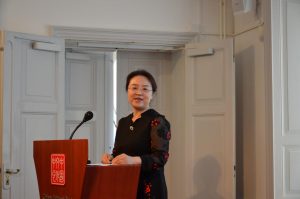 Director Chen Xiao of the Cultural Center said that this Tourism Culture Week will focus on the cultural and tourism products of Anhui Province, including Huangmei Opera, Hui Opera, Shadow Play, ”Beautiful Anhui” video and photo exhibition, intangible cultural heritage exhibition and Anhui characteristics. Snacks, etc., will present a cultural feast for the Swedish friends to see, hear, and taste. At the same time, this year marks the 40th anniversary of reform and opening up. The ”Pudong Today” exhibition will also be exhibited during the same period, reflecting the latest achievements in the development and opening up of Shanghai Pudong New Area.

Director Thomas Lindman said that China and Sweden maintain friendly, mutual trust and cooperation in culture and in line with the common aspirations and interests of the two peoples. 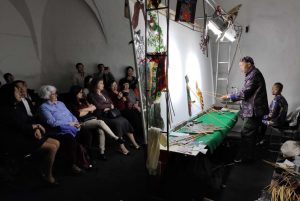 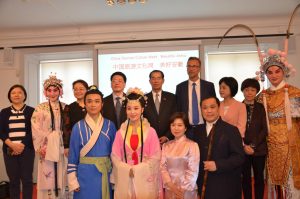 The guests watched the performances of the Qinhuang ensemble, Huangmei opera, and Hui opera brought by the Anhui Art Troupe and tasted Anhui specialties.
On the day of the opening ceremony, Swedish friends with autism watched the shadow play. After the performance, all of them were elated, and the Counselor Chen Xiao and the friends hugged and took photos for a long time. They all said that they would come to the Stockholm Chinese Cultural Center next time.

On the day of the cultural center, a huge ”China Tourism Culture Week” flags were fluttering, and the indoor Chinese red, gourd pyrography, paper-cut, silk-cotton painting, bamboo carving, wood carving, facial molding and other non-legacy items were colorful and dazzling.
The atmosphere and fashion of the Pudong exhibition showcases the ancient but young and vibrant image and perception of Chinese culture, providing a cultural feast for Swedish friends and making them linger.

The ”China Tourism Culture Week – Beautiful Anhui” event was jointly organized by the Chinese Embassy in Sweden, the Anhui Provincial Department of Culture and Tourism, and the Stockholm Chinese Cultural Center. The event lasted until June 7.