Dashu (Great Heat), the 12th solar term of the year and the last one in summer, falls on July 22 this year, which is the 2nd of the sixth month according to Chinese lunar calendar. Dashu arrives during “the three periods of the hot season” (sanfu in Chinese, which is from July 16 to August 24 this year), when the sunlight and temperature peak in China. The three “Furnaces”, namely Chongqing, Wuhan and Nanjing, may be the hottest cities in China. The strong sunlight, high temperature and humidity may not be favorable to people, but good for agricultural development. Crops of the warm season enjoy their fastest period of growth around Dashu.

Traditionally, people drink herbal tea made of honeysuckle, selfheal, liquorice and a variety of herbs to cool off in the heat. Some regions, including Shanxi and Henan provinces, maintain the tradition to make ginger syrup. Mix ginger slices or juice with brown sugar in a container covered with gauze and put it under the sun. After it is fully blended, the ginger syrup is specially effective to cure stomach cold and cough due to common cold. In Guangdong, people eat mesona around Dashu, which is usually made into a popular jelly dessert. Other traditions include eating litchi in Fujian, pineapple in Taiwan and having lamb soup in Shandong.

In the hottest season of the year, it’ll be fun to visit one of the “furnace” cities – Chongqing. This mountainous city famous for hot pots will give you a unique summer experience.
视频播放器
Video provided by China Xinhua News Network Corporation

Located in southwestern China, Chongqing is the only municipality directly under the central government in central-western China. As the center of economy, finance, science and technology innovation, shipping and trade logistics in the upper reaches of the Yangtze River, Chongqing is known as the “Mountain City” and is nicknamed “City of Fog, Rivers and Bridges”. All 55 Chinese ethnic minority groups, mostly Tujia and Miao peoples, live in Chongqing, constituting a vital part of its over 30 million population. As a result, Chongqing features not only the distinctive natural landscape and surreal cityscape, but also diverse and appealing cultural elements of all ethnic groups.
视频播放器
00:00
07:25
Video provided by Chongqing Municipal Commission of Culture and Tourism Development

Cyberpunk, surreal and eight-dimensional, top attraction – Chongqing has been one of the most popular tourist destinations in China and around the world in recent years. Distinctive urban landscape is viewed in this city built on mountains: Hongya Cave, a 11-storey traditional local stilt house abutting a steep cliff; Liziba station, where the light rail goes right through a residential building; Twin River Bridges, two cable-stayed bridges with vertically parallel decks for motor vehicles and light rail; Huangjuewan Overpass, a 5-storey maze connecting 20 ramps and 8 roads and probably the most complicated one in China……and the list goes on. In Chongqing, apart from east, west, north and south, one should also consider the upward and downward directions. When your taxi-hailing app shows that the driver has arrived but you could not see anything, the driver is probably looking for you on the other level of the road as well. If you ask the locals for direction, they may tell you that the best way to go to a certain road is to enter the shopping mall besides you, and exit on a different floor. At some point, you can view all sorts of vehicles by the Yangtze River, from the airplane and Yangtze River cableway in the sky, to cruises and ships on the river, light rail on the bridge and motors on the street, weaving a magical modern cityscape right in front of you. 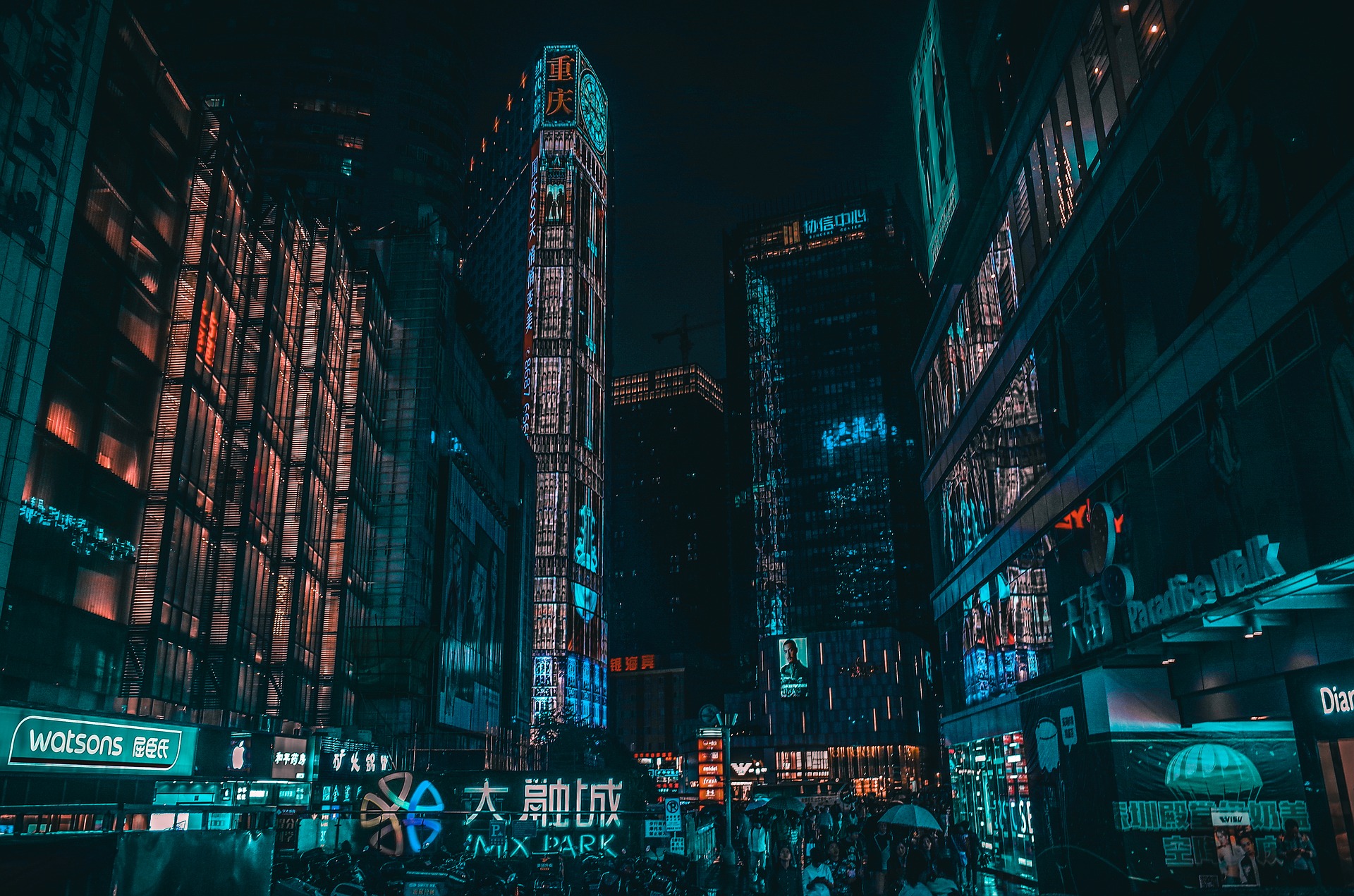 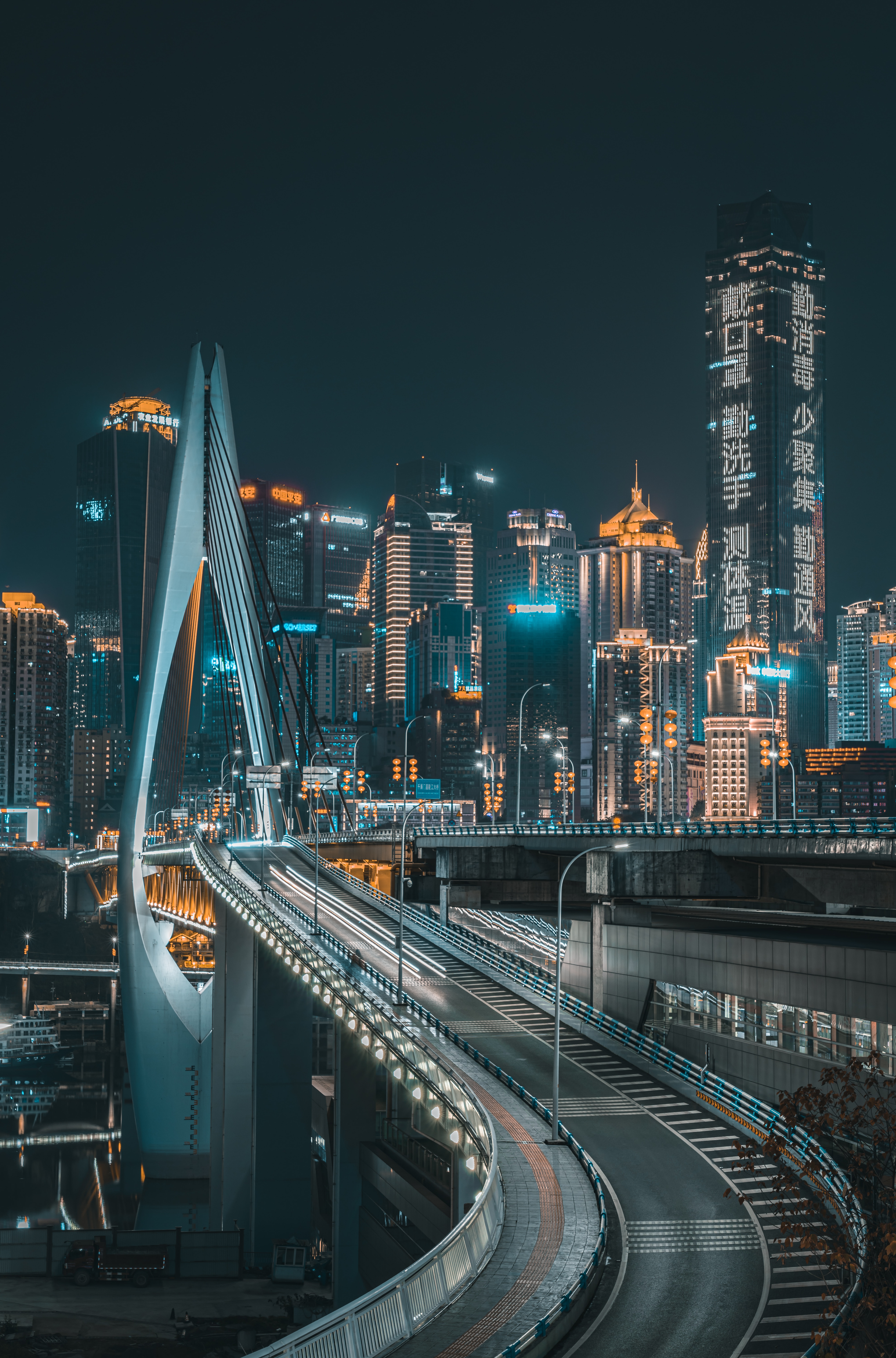 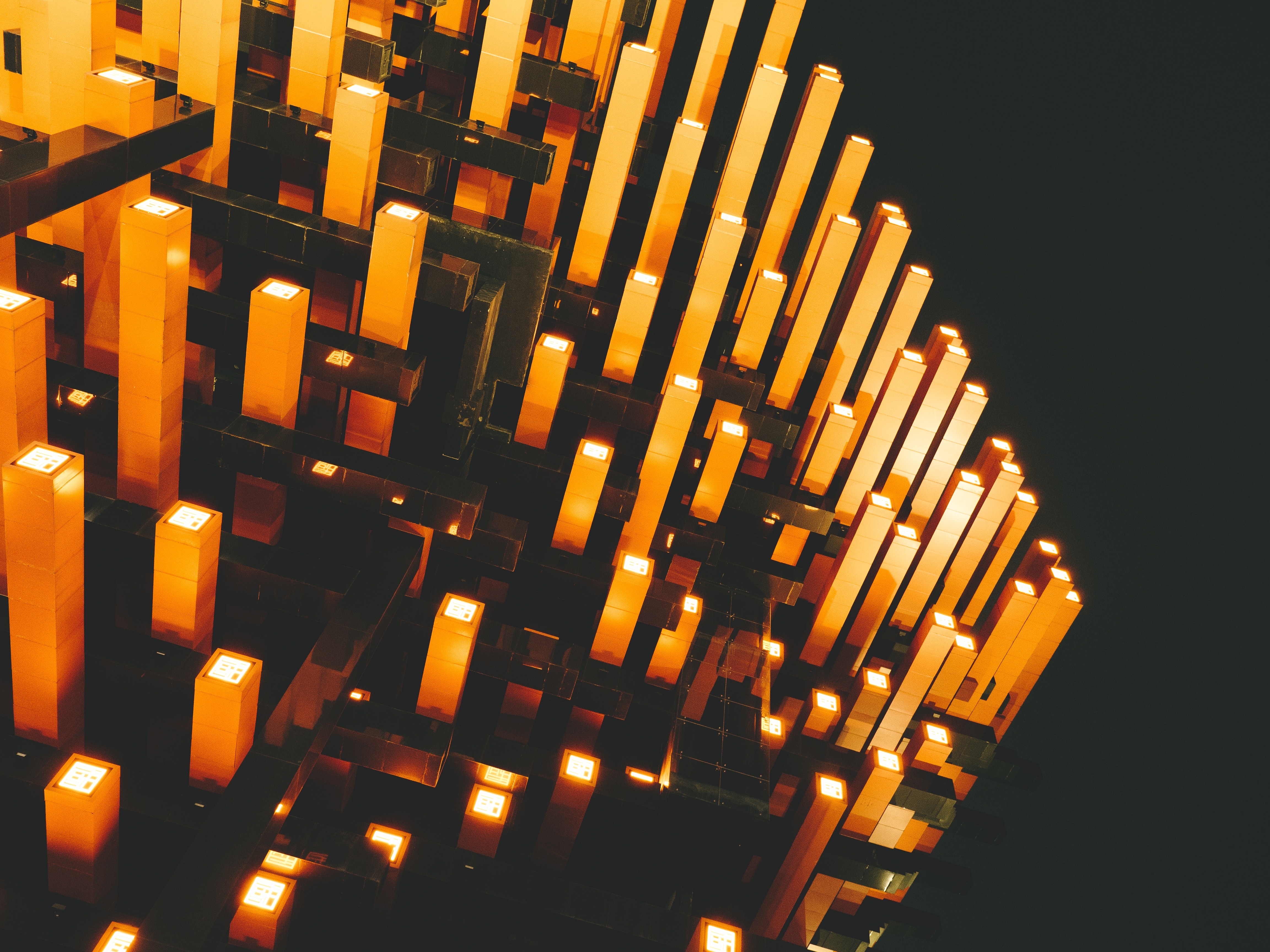 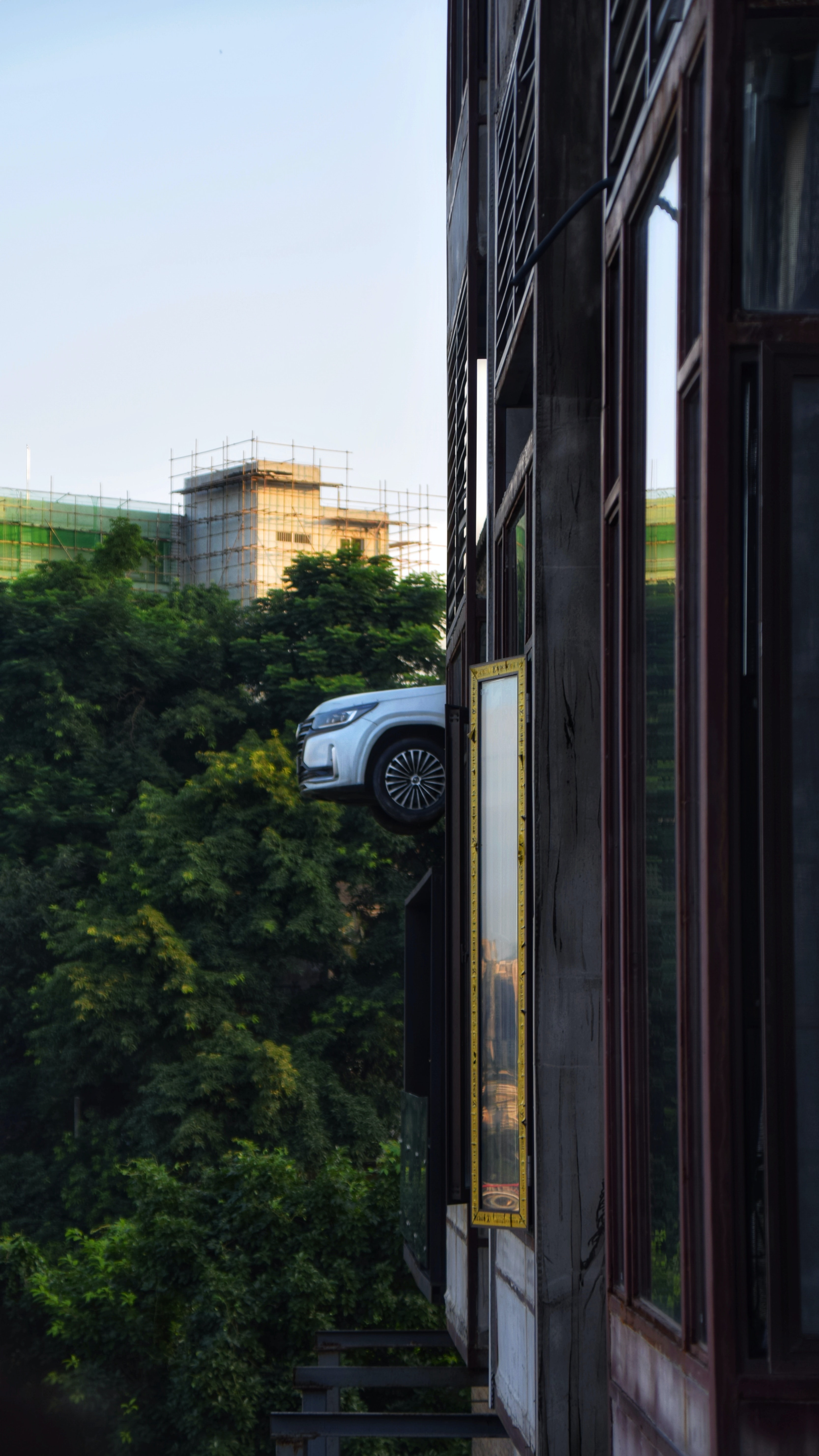 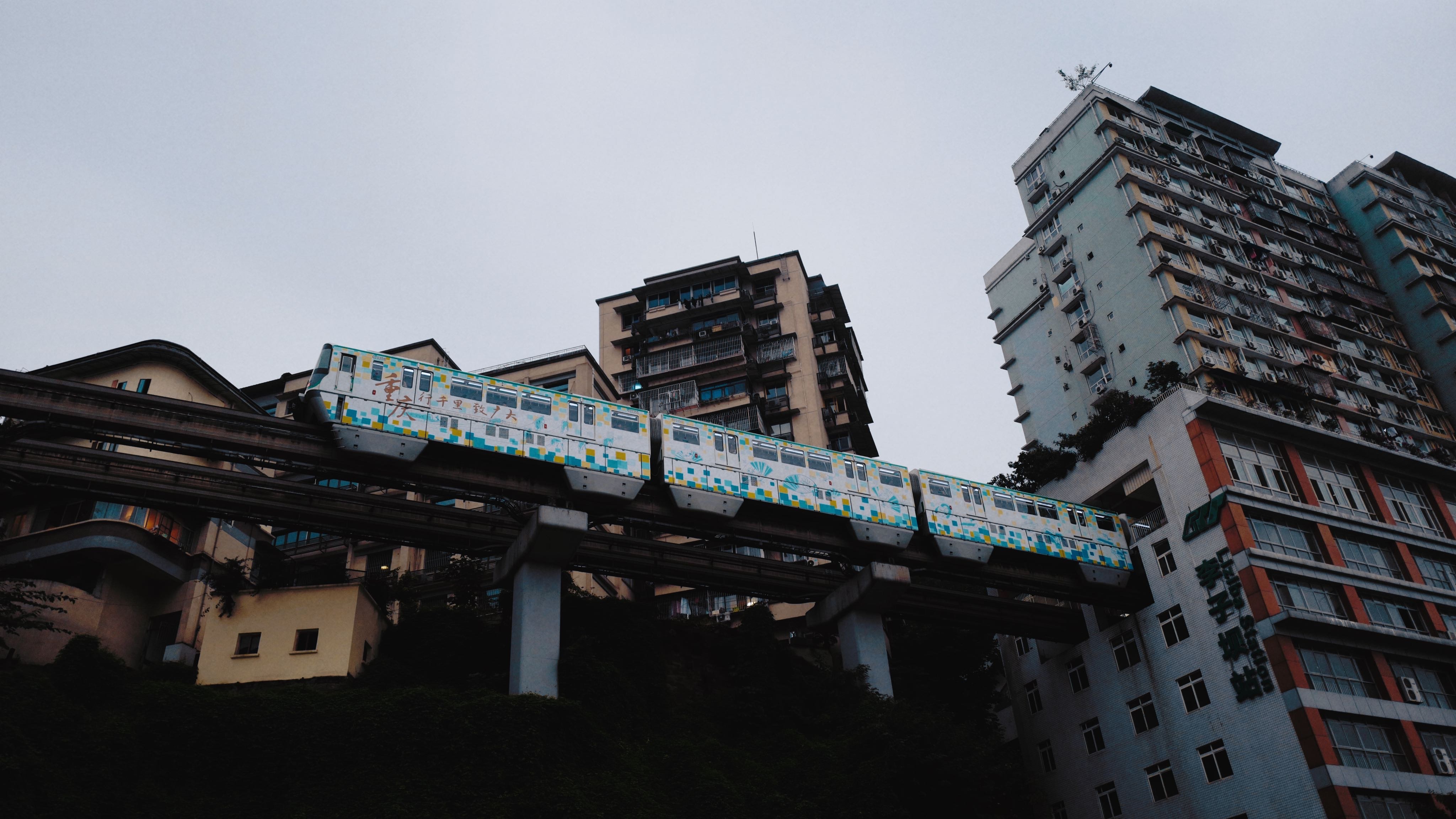 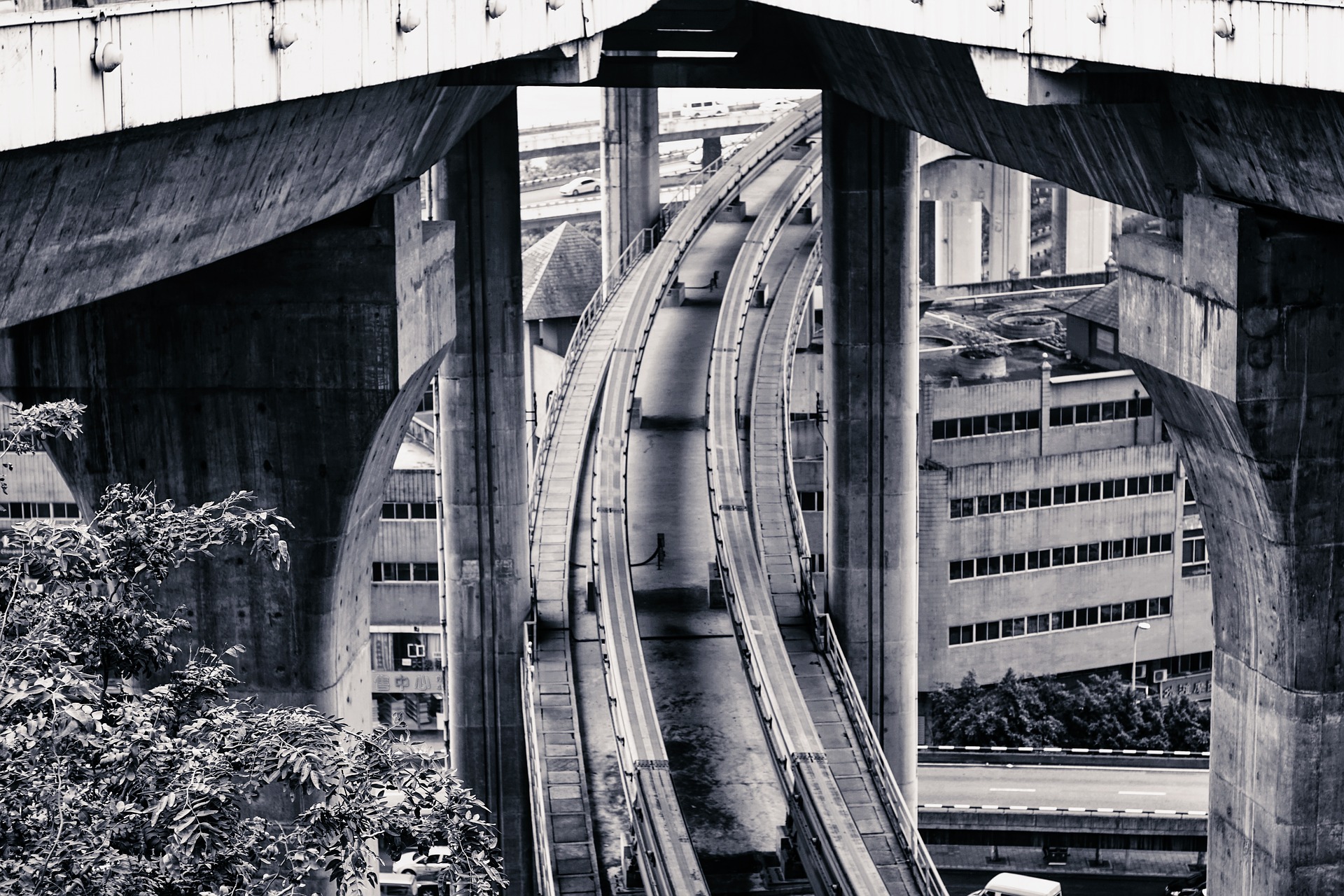 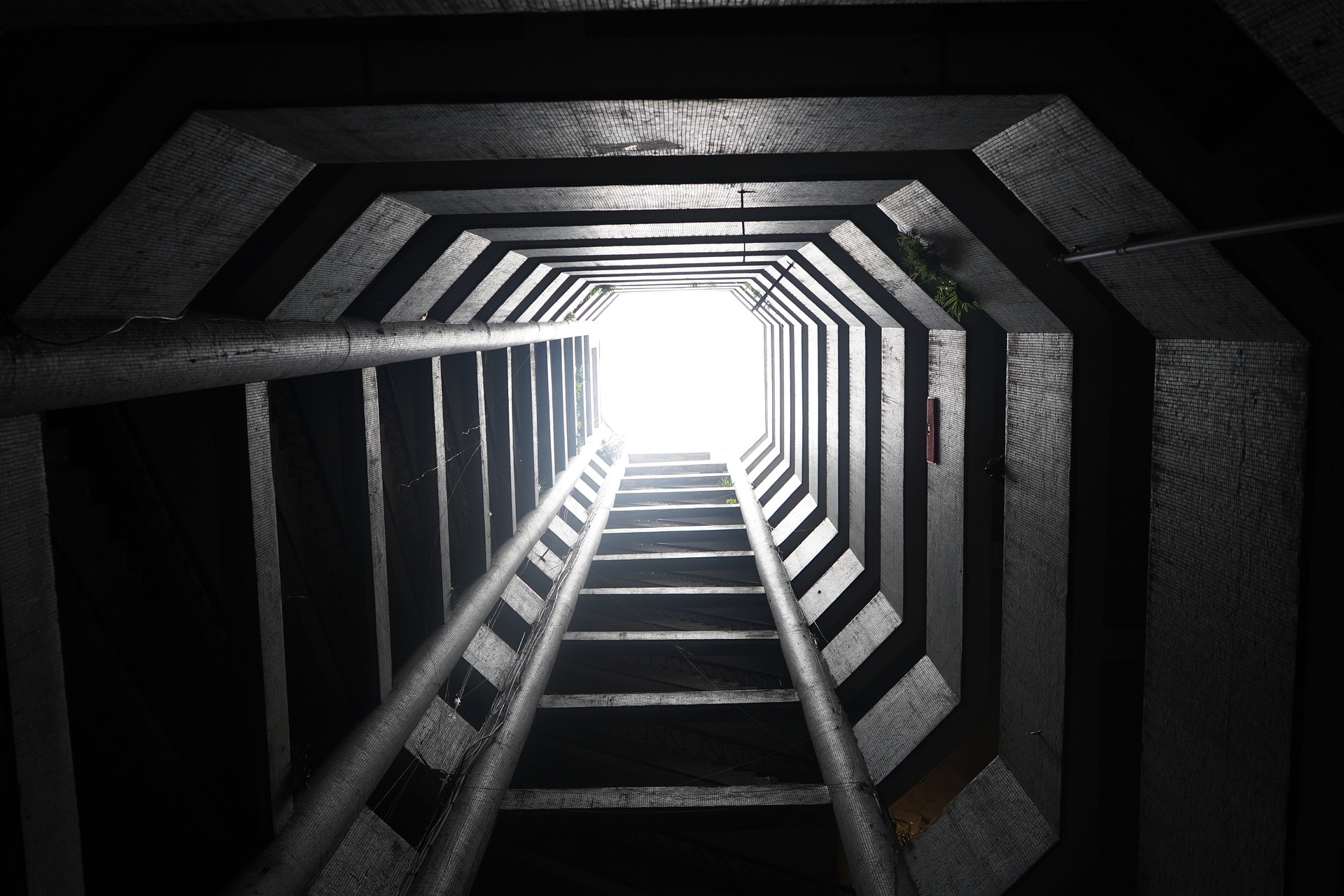 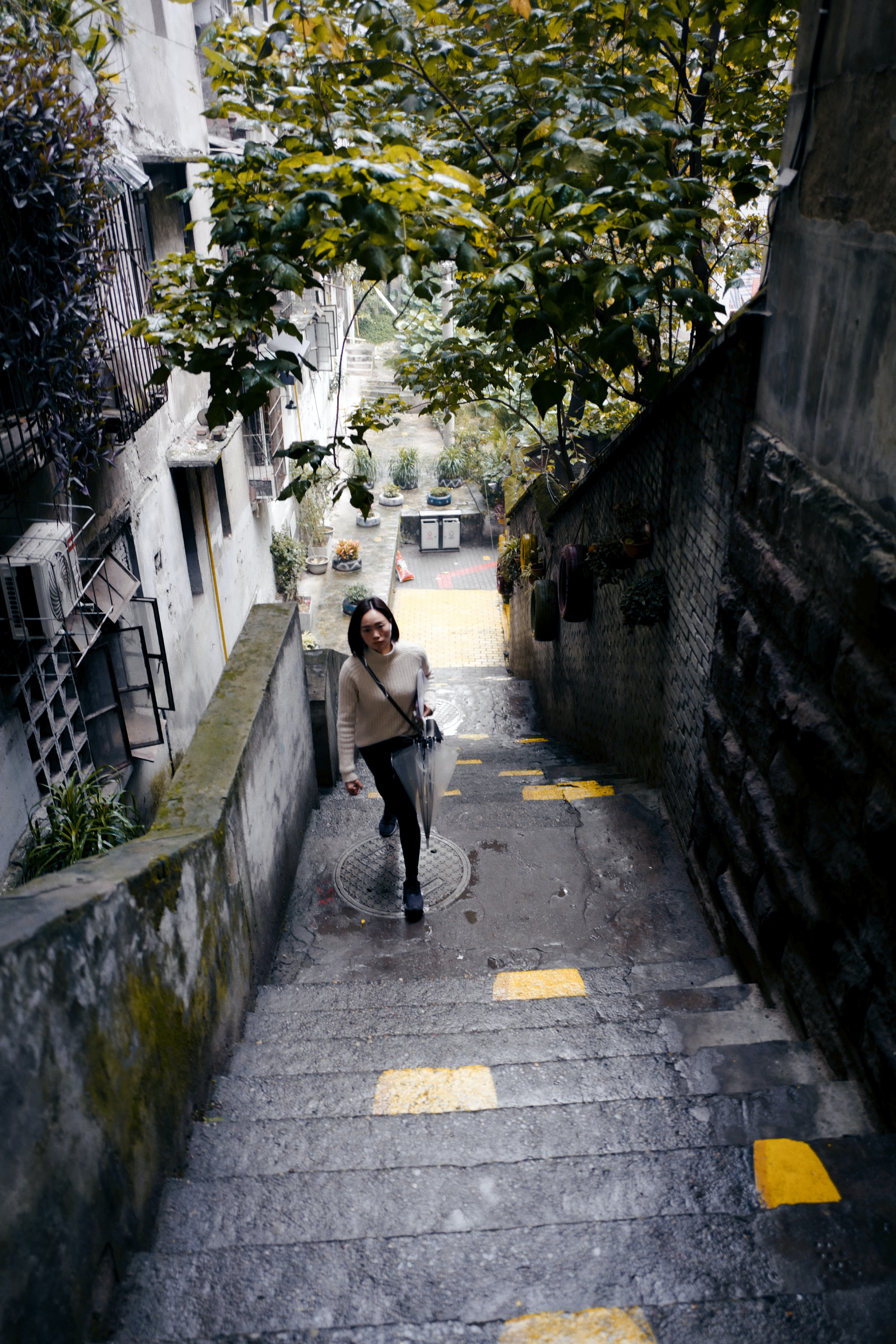 Chongqing enjoys a surreal and magical cityscape, as well as unique and charming natural landscape. Wulong and Jinfo Mountain in Chongqing, as a part of the element South China Karst, was inscribed as UNESCO world natural heritage in 2014. The majestic Wushan Mountain and Lesser Three Gorges feature peculiar peaks reaching up to the sky and lush vegetation, where boats sail on rivers running through underground caves; the spectacular Wulong Karst, an ode to the incredible craftsmanship of nature, encompass karst caves, dolines, gorges, peak clusters and alpine meadows and a range of other landforms; Wansheng Black Mountain Valley, praised as “the most beautiful valley of health preservation” in China, is a scenic zone of wondrous scenery featuring steep mountains, sparkling streams, enchanted forests and secluded caves. In Chongqing, one is able to view all kinds of creation of nature.

Diverse and integrated cultural landscape of Chongqing fully displays and protects the appealing cultural treasures and folk customs of all ethnic groups. Dazu Rock Carvings were listed as world cultural heritage by UNESCO in 1999 due to their grand scale, remarkable aesthetic quality, rich diversity of subject matter and significant historical, scientific and artistic values. Baiheliang Underwater Museum, the first underwater museum in China, is built based on Baiheliang Ancient Hydrological Inscription recording 72 years of water level variation data in over 1200 years and is endorsed by UNESCO as the “No.1 Ancient Hydrometric Station in the World”. Baidi City, the “City of Poetry”; Anju Ancient Town, Tongliang county; Wanling Ancient Town, Rongchang district; Chiyou (ancestor of the Miao people) Jiuli City…… all these ancient towns have been lying in the nature for thousands of years and continue to preserve the roots of local culture.
The mountains and rivers in Chongqing have nurtured a unique local culture that shines in the classic poems of acclaimed poets throughout history – Li Bai, Du Fu, Bai Juyi, Li Shangyin, Su Shi, Huang Tingjian, etc. Their epic poems, depicting and revealing the magnificent scenery as scroll paintings, may lead us to the splendid spiritual worlds of the ancients.

Leaving at dawn the White Emperor crowned with cloud;

I’ve sailed a thousand miles through Gorges in a day.

With monkeys’ sad adieux the riverbanks are loud;

My skiff has left ten thousand mountains far away.

Think of My Dear Wife

No water’s enough when you have crossed the sea；

No cloud is beautiful but that which crowns the peak.

I pass by flowers that fail to attract poor me;

Half for your sake and half for Taoism I seek. 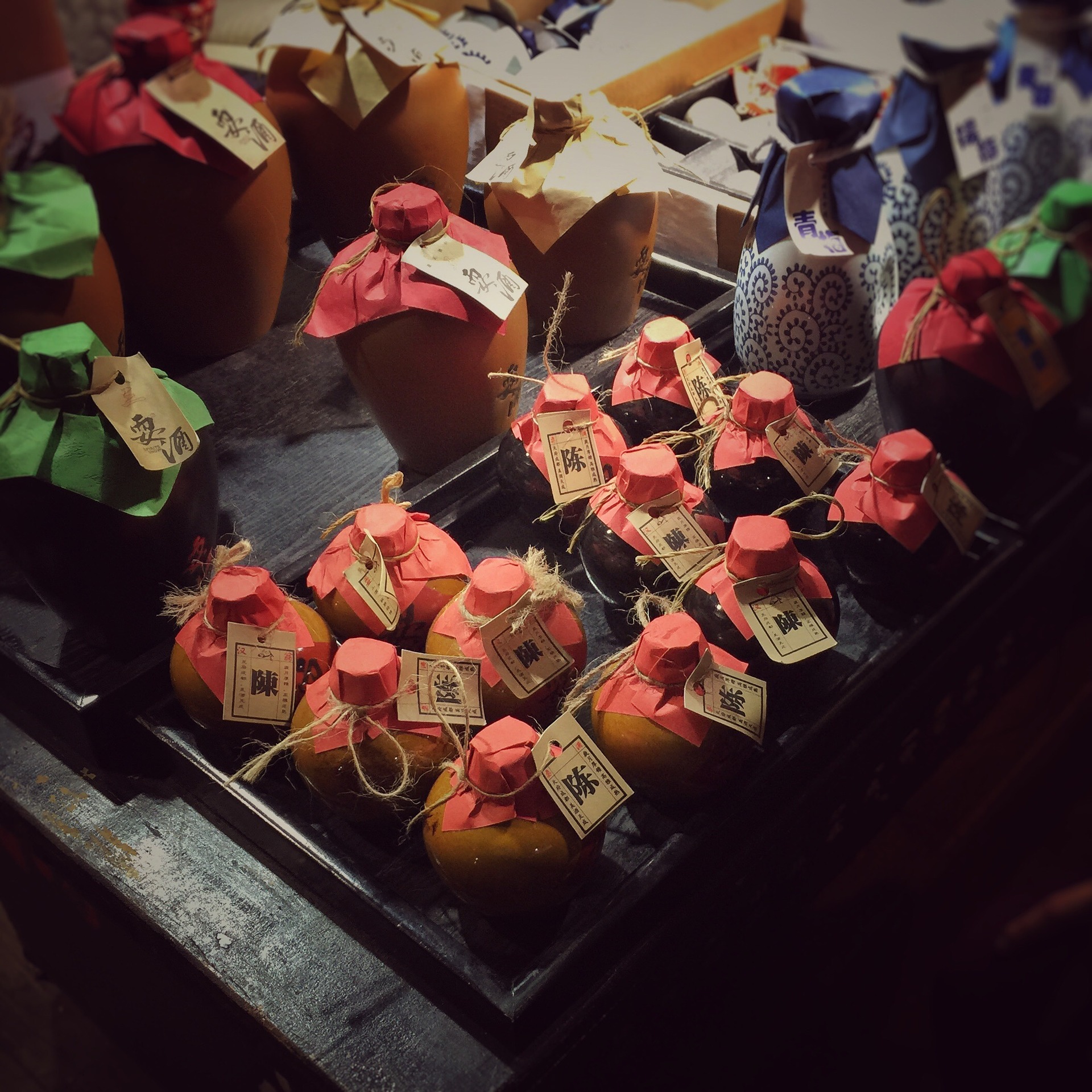 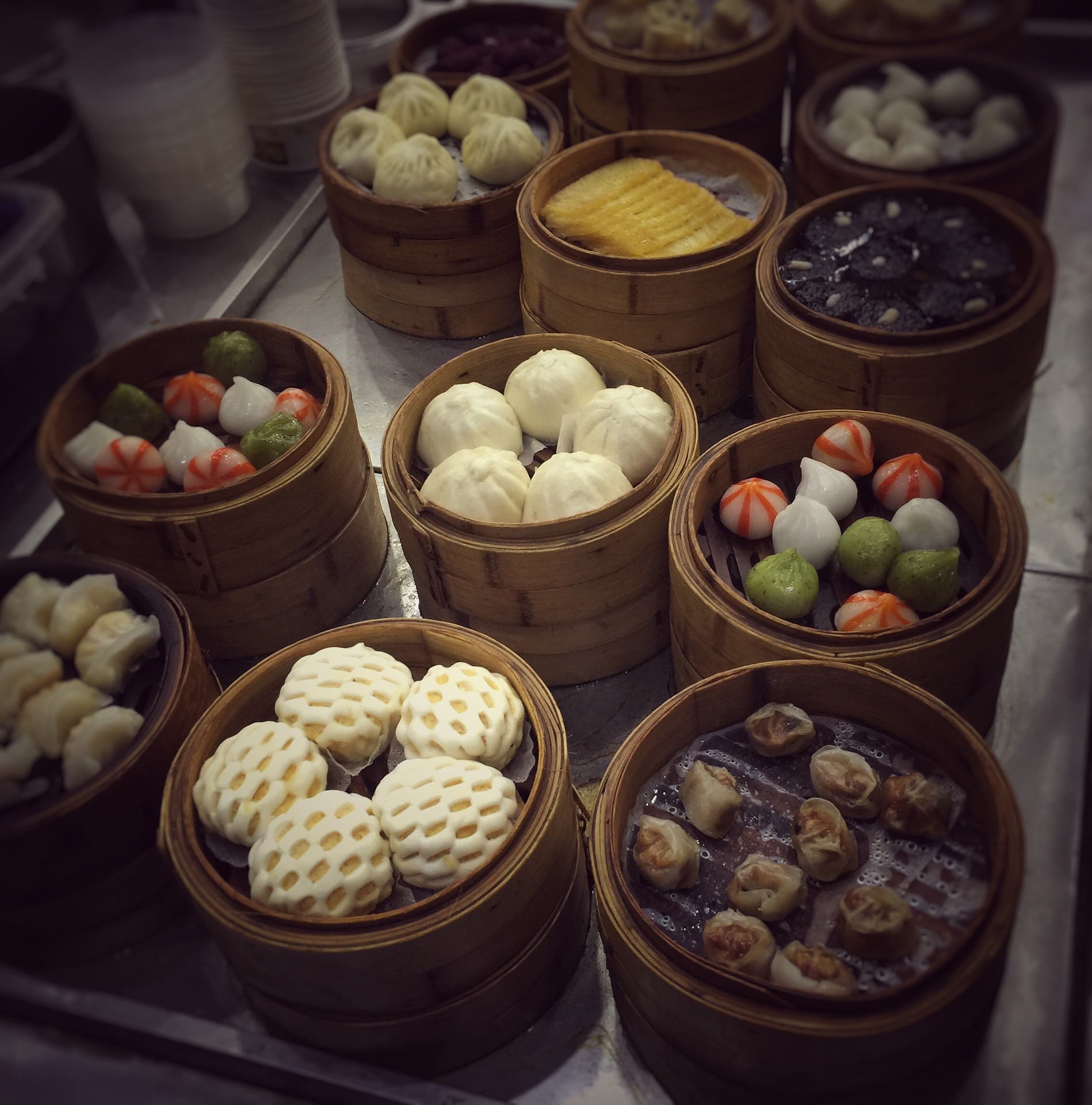 China and Sweden share a common interest in crayfish. In China, pungent and spicy crayfish is popular across the nation, as well as braised crayfish in chili / garlic / soy sauce / with beer and grilled crayfish, etc. In Sweden, people hold outdoor crayfish party every August to celebrate the end of summer. Eaten only by Sweden’s upper-class citizens and aristocracy in the 1500s, crayfish have become a national delicacy enjoyed by all. Indeed, many people like to catch their own crayfish. The most popular way of cooking crayfish is to boil them in brine with plenty of crown dill. Paper tablecloth and colourful plates are arranged with gaily coloured paper lanterns hung around the table. The most popular type of lantern shows a smiling full moon. People wear bibs around their necks and comic paper hats on their heads. You eat crayfish cold, with your fingers. Sucking noisily to extract the juices is perfectly acceptable behaviour. Bread and a strong cheese such as mature Västerbotten are side dishes. People mostly drink beer and the inevitable schnapps. 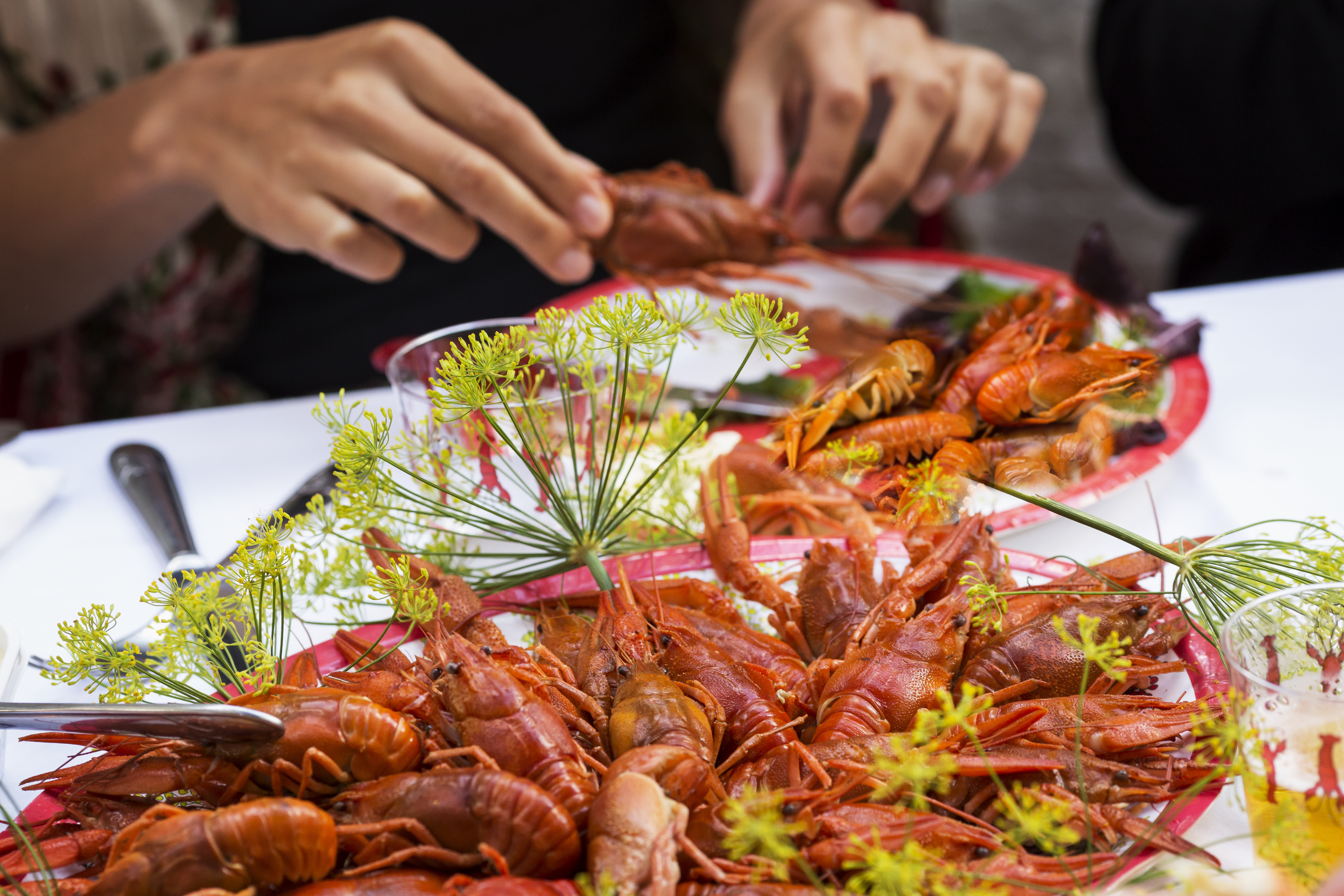